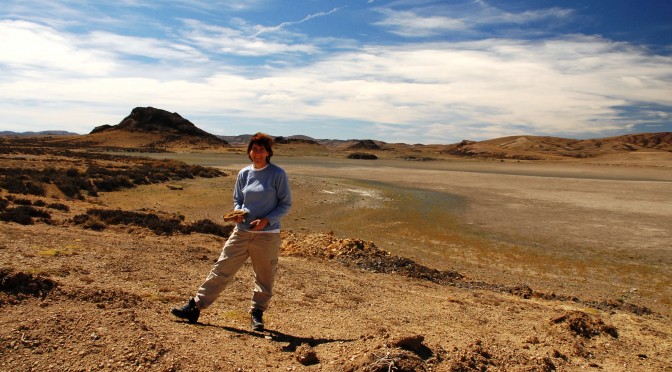 Professor Kathleen A. Campbell, School of Environment,
The University of Auckland

The interaction of ancient organisms with their surrounding environments is the broad theme of Kathleen’s research interests as a geologist and astrobiologist. She is particularly intrigued by crustal fluid-sediment-organism interactions leaving behind signatures of “extreme environments” in the geologic record. They are used by scientists as analogs in the search for past life on early Earth and perhaps other planets.

Kathleen was educated along the geologically active margin of the western U.S. – from the University of California (Santa Cruz, B.S.), to the University of Washington (M.S.), to USC (Ph.D.). She subsequently undertook post-doctoral research study (1995-97) at NASA Ames Research Center, Exobiology Branch. She then landed a research and teaching position at the University of Auckland, where she has co-supervised 60 graduate students and collaborates with scientists in the U.S., Argentina, France, Germany, Japan and China.

Her awards include Hochstetter Lecturer (Geoscience Society of New Zealand, 2009), Burbidge Lecturer (Auckland Astronomical Society, 2011), and Senior Research Fellow (LE STUDIUM® – Institute for Advanced Studies, Orléans, France, 2014). Kathleen is a member of the GSNZ, GSA, SEPM and the Paleontological Society, is an associate editor or editorial board member on 5 scientific journals, and serves as Head of Discipline (Earth Sciences) in the School of Environment in Auckland.