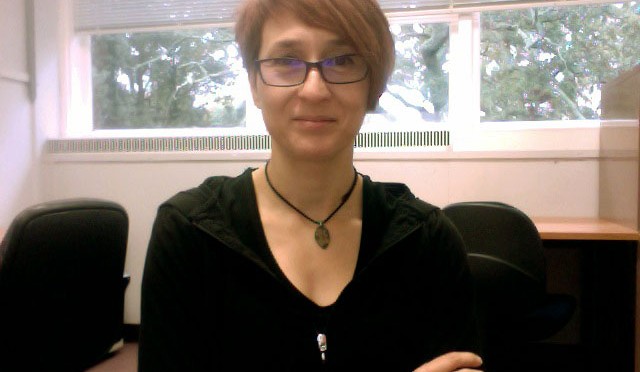 Olga Prieto Ballesteros is a planetary geologist in the Planetary and Habitability Department of the Centro de Astrobiologia (INTA-CSIC) in Madrid. She conducts laboratory experiments to better understand gas hydrates of Jupiter’s moon, Europa.

During 2015, she is visiting New Zealand with a research project that is studying modern analogue gas hydrate data from a terrestrial site, the Hikurangi Margin of eastern North Island. Geomorphological data from New Zealand seafloor sites of gas hydrate occurrence will likely help to identify comparable evidence of the gas hydrates presence on the surface of icy moons.

During a campaign for testing SOLID in Antarctica, an instrument for space missions used to detect life

“I have chosen New Zealand’s gas hydrate deposits for two important reasons: one is that here we can study different types of gas hydrates relevant in other planets of the Solar System, formed in different extreme environments, whose dissociation sometimes produces highly intriguing features and in some cases are associated to unpredictable exuberant habitats ; the other is that researchers from NZ are leading experts in their fields, so we expect a fruitful multidisciplinary collaboration.” says Olga.

The research work is funded by a grant of the “Salvador de Madariaga” program, a Spanish government Science Projects mobility fund. The project will be developed in collaboration with Professor Kathleen Campbell from the University of Auckland, and Dr. Cornel de Ronde and Dr. Gareth Crutchley from GNS, Wellington.

Connect with Olga on ResearchGate