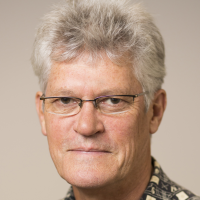 A new theory that addresses how life arose on Earth, proposes that it originated in an intimate partnership between the nucleic acids (genetic instructions for all organisms) and small proteins called peptides and contradicts the widely-held “RNA-world” hypothesis, which states that life originated from nucleic acids and only later evolved to include proteins.

Peter Wills, a New Zealand astrobiologist is the co-author of this study.

Peter Wills, PhD, a professor of physics at the University of Auckland, said “Compared to the RNA-world hypothesis, what we’ve outlined is simply a much more probable scenario for the origin of life. We hope our data and the theory we’ve outlined in these papers will stimulate discussion and further research on questions relevant to the origins of life.”

The following is the press release from University of North Carolina:

American and New Zealand researchers use experimental evidence to overturn widely-accepted theory on the dawn of life on Earth.

CHAPEL HILL, NC – Life on Earth originated in an intimate partnership between the nucleic acids (genetic instructions for all organisms) and small proteins called peptides, according to two new papers from biochemists and biologists at the University of North Carolina at Chapel Hill and the University of Auckland. Their “peptide-RNA” hypothesis contradicts the widely-held “RNA-world” hypothesis, which states that life originated from nucleic acids and only later evolved to include proteins.

The new papers, in Molecular Biology and Evolution and in Biosystems, show how recent experimental studies of two enzyme superfamilies surmount the tough theoretical questions about how complex life emerged on Earth more than four billion years ago.

“Until now, it has been thought to be impossible to conduct experiments to penetrate the origins of genetics,” said co-author Charles Carter, PhD, professor of biochemistry and biophysics at The UNC School of Medicine. “But we have now shown that experimental results mesh beautifully with the ‘peptide-RNA’ theory, and so these experiments provide quite compelling answers to what happened at the beginning of life on Earth.”

The special attributes of the ancestral versions of these enzyme superfamlies, and the self-reinforcing feedback system they would have formed with the first genes and proteins, would have kick started early biology and driven the first life forms toward greater diversity and complexity, the researchers said.

Co-author Peter Wills, PhD, a professor of physics at the University of Auckland, said “Compared to the RNA-world hypothesis, what we’ve outlined is simply a much more probable scenario for the origin of life. We hope our data and the theory we’ve outlined in these papers will stimulate discussion and further research on questions relevant to the origins of life.”

The two scientists are fully aware that the RNA-world hypothesis still dominates the origin-of-life research field.

“That theory is so alluring and expedient that most people just don’t think there’s any alternative,” Carter said. “But we are very confident there is.”

Before there was life on Earth, there were simple chemicals. Somehow, they produced both amino acids and nucleotides that eventually became the proteins and nucleic acids necessary to create single cells. And the single cells became plants and animals. Research this century has revealed how the primordial chemical soup created the building blocks of life. There is also widespread scientific consensus on the historical path by which cells evolved into plants and animals. But it’s still a mystery how the amino acid building blocks were first assembled according to coded nucleic acid templates into the proteins that formed the machinery of all cells.

The widely accepted RNA-world theory posits that RNA – the molecule that today plays roles in coding, regulating, and expressing genes – elevated itself from the primordial soup of amino acids and cosmic chemicals, eventually to give rise first to short proteins called peptides and then to single-celled organisms.

Carter and Wills argue that RNA could not kick start this process alone because it lacks a property they call “reflexivity.”  It cannot enforce the rules by which it makes useful catalysts. RNA needed peptides to form the reflexive feedback loop necessary to eventually lead to life forms.

At the heart of the peptide-RNA theory are enzymes so ancient and important that their remnants are still found in all living cells and even in some sub-cellular structures, including mitochondrial and viral life cycles. There are 20 of these ancient enzymes called aminoacyl-tRNA synthetases (aaRSs). Each of them recognizes one of the 20 amino acids that serve as the building blocks of proteins. (Proteins, considered the machines of life, catalyze and synchronize the chemical reactions inside cells.) In modern organisms, an aaRS effectively links its assigned amino acid to an RNA string containing three nucleotides complementary to a similar string in the transcribed gene. The aaRSs thus play a central role in converting genes into proteins, a process called translation that is essential for all life forms.

The 20 aaRS enzymes belong to two structurally distinct families, each with 10 aaRSs. Carter’s recent experimental studies showed that the two small enzyme ancestors of these two families were encoded by opposite, complementary strands of the same small gene. The simplicity of this arrangement, with its initial binary code of just two kinds of amino acids, suggests it occurred at the very dawn of biology. Moreover, the tight, yin-yang interdependence of these two fraternal but highly distinct enzymes would have stabilized early biology in a way that made inevitable the orderly diversification of life that followed.

“These interdependent peptides and the nucleic acids encoding them would have been able to assist each other’s molecular self-organization despite the continual random disruptions that beset all molecular processes,” Carter said. “We believe that this is what gave rise to a peptide-RNA world early in Earth’s history,” Carter said.

“The enforcement of the relationship between genes and amino acids depends on aaRSs, which are themselves encoded by genes and made of amino acids,” Wills said. “The aaRSs, in turn, depend on that same relationship. There is a basic reflexivity at work here. Theorist Douglas Hofstadter called it a ‘strange loop.’ We propose that this, too, played a crucial role in the self-organization of biology when life began on Earth. Hofstadter argued that reflexivity furnishes the force driving the growth of complexity.” Carter added. 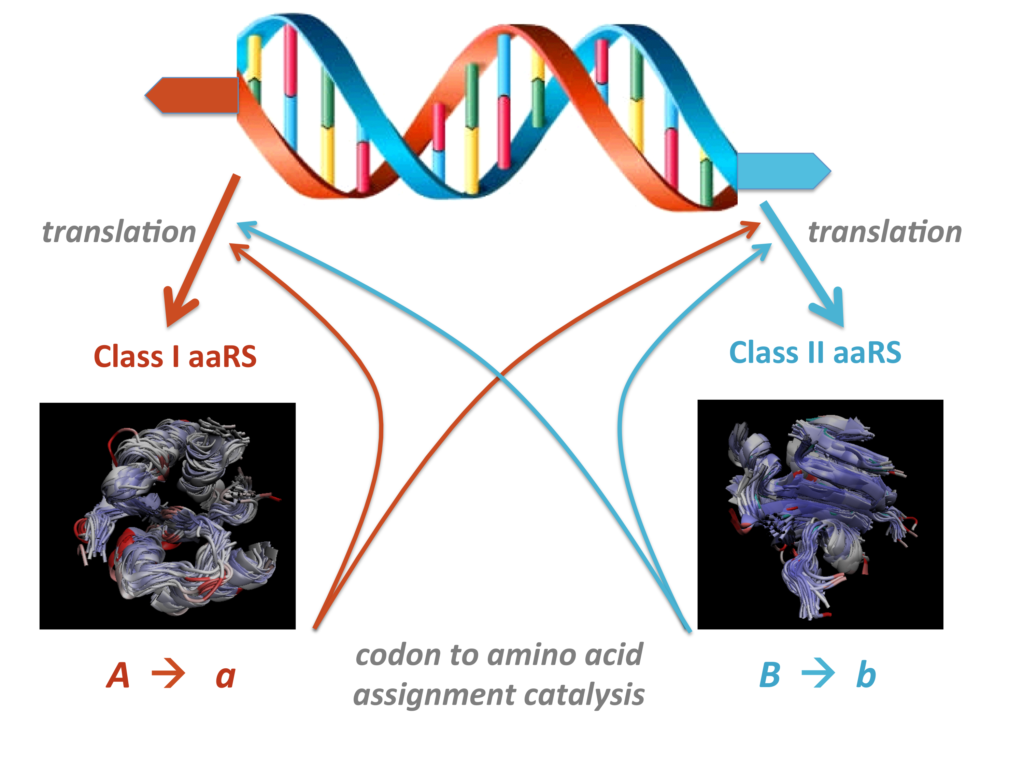 “The opposite complementary strands (blue and orange) of a single RNA double helix are tanslated in opposite directions to produce enzymes that catalyse the same chemical reaction (attachment of an amino acid to tRNA) but are specific for different, separate sets of amino acids. The stucturally disparate Class I and II enzymes separate the 20 biological amino acids into two disjoint sets, supporting the execution of a two-letter (binary) code for the translation of genetic information into protein form (chains of amino acids). Both enzymes are required to produce either of them from their corresponding genetic templates. The process is intrinsically cooperative rather than competitive.”

Carter and Wills developed two additional reasons why a pure RNA biology of any significance was unlikely to have predated a peptide-RNA biology. One reason is catalysis – the acceleration of chemical reactions involving other molecules. Catalysis is a key feature of biology that RNA cannot perform with much versatility. In particular, RNA enzymes cannot readily adjust their activities to temperature changes likely to have happened as the earth cooled, and so cannot perform the very broad range of catalytic accelerations that would have been necessary to synchronize the biochemistry of early cell-based life forms. Only peptide or protein enzymes have that kind of catalytic versatility, Carter said.

Secondly, Wills has shown that impossible obstacles would have blocked any transition from a pure-RNA world to a protein-RNA world and onward toward life.

“Such a rise from RNA to cell-based life would have required an out-of-the-blue appearance of an aaRS-like protein that worked even better than its adapted RNA counterpart,” Carter said. “That extremely unlikely event would have needed to happen not just once but multiple times – once for every amino acid in the existing gene-protein code. It just doesn’t make sense.”

Thus, because the new Carter-Wills theory actually addresses real problems of the origin of life that are concealed by the expediency of the RNA world hypothesis, it is actually a far simpler account of how things probably happened just before life on Earth rose from the primordial soup.

The National Institute of General Medical Sciences and the John Templeton Foundation funded the research.