No Life Under Ice at Europa?

Home » Blog » No Life Under Ice at Europa? 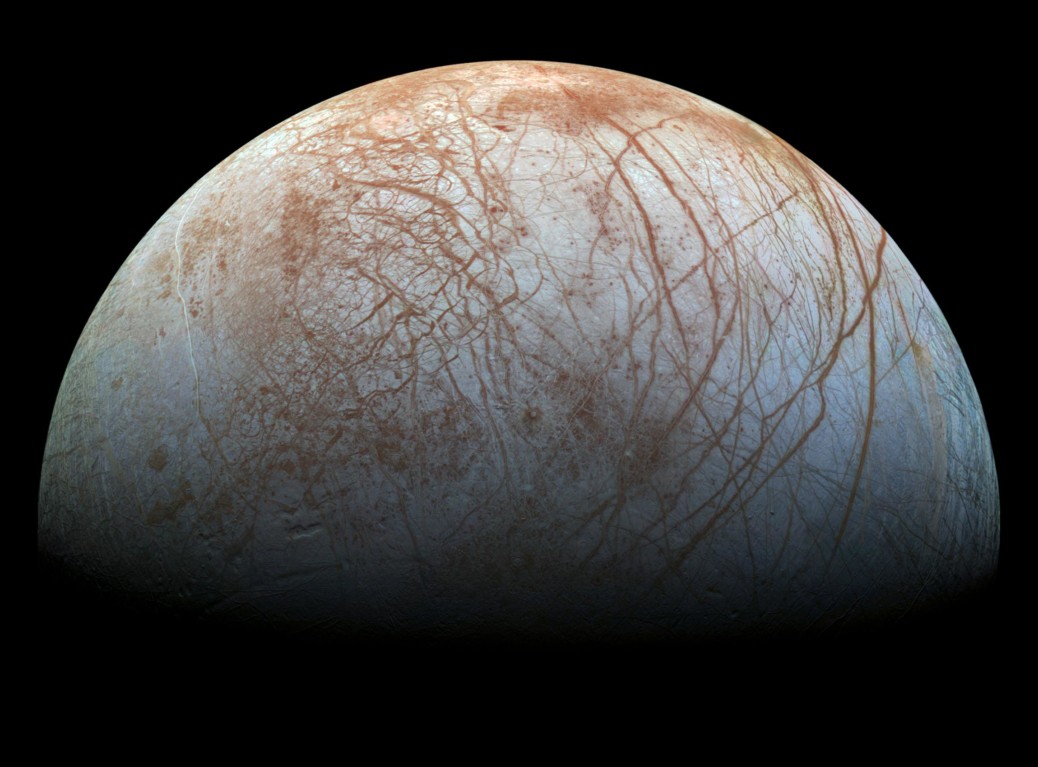 There has been much speculation that there may be life in oceans of water under the ice layer of the Jovian satellites, particularly for Europa. In my theory, outlined in my ebook Planetary Formation and Biogenesis, there will be no such life.

The main reasons arise from the way the planets are formed. While in standard theory planets form from planetesimals (although nobody has any realistic suggestion for how they form) in my theory, accretion of the outer planets arises the same way snowballs form: melt-fusion of ices. Amorphous ices adsorb other gases that also ice into their channels (this has been shown in the lab), and at a suitable temperature range, collisional energy would melt such adsorbed ices. Suitable ices, going outwards, include (with melting points) water (273 oK), water/methanol/ammonia (eutectic, 164 oK) methane and argon (~ 90 oK) carbon monoxide and nitrogen (~ 64 oK) and neon ( 25 oK). As the ices come into the system the disk warms, there is a region where such events can happen, then as it warms further, that ice vaporizes but leaves others still unaffected.

Put T ∝r-q, where T is the temperature, r the stellar distance, and q an approximate constant. Observationally, the surface of such stellar disks shows q to average about 0.75; however, since the surface should be cooler than the centre, putting q = 0.825 and assuming that Jupiter formed at the optimal position for water ice, and is set at 5.2 A.U., then the next ice is ammonia/methanol/water, which could melt between 164 – 195 oK, which suggests that Saturn should be between 7.8 – 9.6 A.U. Saturn has a semimajor axis of 9.5 A.U. The next ice out is methane/argon, with melting between 84 – 90 oK. The calculated position of Uranus is between 20-21.7 A.U., while the observed position is 19.2 A.U. The next ice, carbon monoxide/nitrogen melts between 63 – 68 oK, which predicts Neptune to be between 28.1 – 30.7 A.U., and Neptune has a semimajor axis of 30 A.U. The reader can form his or her own opinion on whether that is satisfactory.

But, let us suppose that is correct. Now we see that the Jovian system has no nitrogen-containing compounds, nor any carbon-containing compounds, other than those delivered from space subsequently. The satellites have collected a small amount of carbonaceous material. The most common species are oxygen and hydrogen, which are products from the photolysis of water. Also present are oxygen atoms, hydroxyl radicals, sodium, and at up to five orders of magnitude less common than oxygen, carbon dioxide and sulphur dioxide. These species are believed to be formed by photolysis of surface ice, or ice fragments ejected by sputtering due to high-energy particle impacts. Despite measurements over five orders of magnitude in concentration in barely detectable pressures, there are no nitrogen species present.

Accordingly, there will be no life under the ice at Europa because there is very little carbon or nitrogen present, which also explains why Titan has an atmosphere and the bigger Ganymede does not. There are, of course, other reasons for an absence of life. There is no obvious source of energy as photons would not penetrate the ice. (Single cell creatures cannot operate a heat engine.) There is also no way of forming phosphate esters, but that is a further story. The simple absence of nitrogen and carbon means no nucleic acids, and that means no reproduction, and that means no life. Before huge amounts of money are spent seeking it, the presence or absence of sufficient carbon and nitrogen should be determined. All the evidence so far suggests it is absent.