Rocks that tell a story

Volcanic and hydrothermal rocks are found on both Earth and Mars. Where water heated by volcanism occurs on Earth we find life.

Was this the same on Mars back in its distant past, when water flowed on the surface and volcanoes were active?

We collected a selection of rocks and fossils formed in the Taupo Volcanic Zone in the presence of water and the heat of volcanism which are often used by scientists to help narrow the search for past life on the Red Planet. 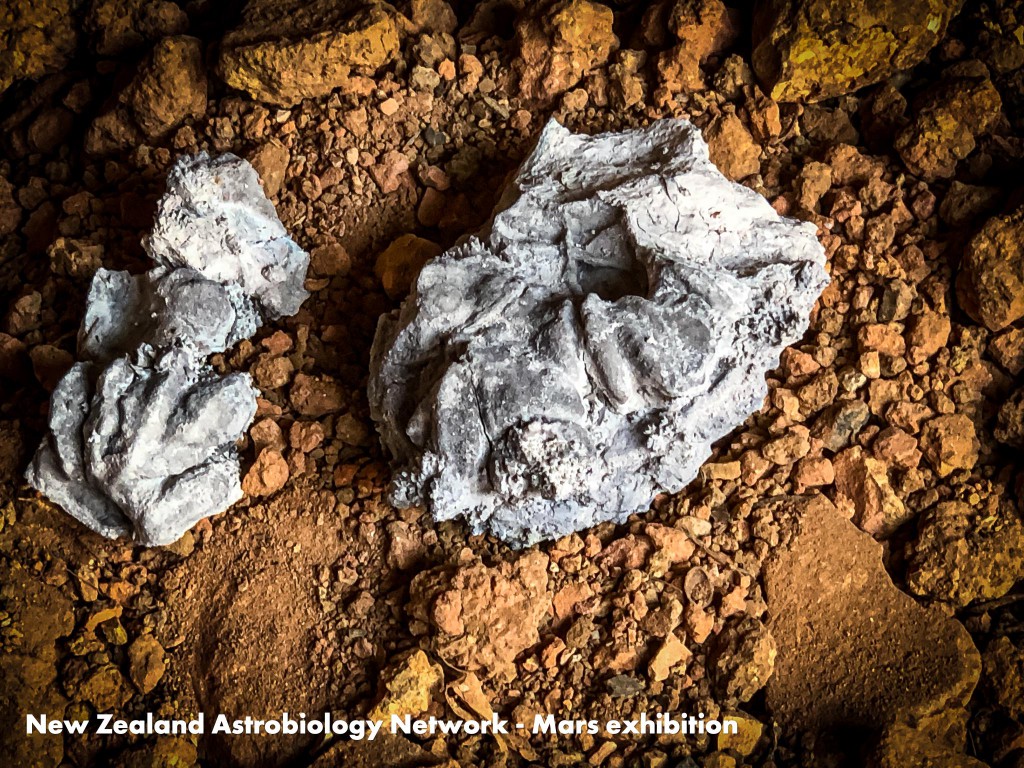 Silica-charged hydrothermal fluids percolated through coarse volcaniclastic sands,at Tikitere(Hell’s Gate geothermal area) cementing them and turning them to a sandstone.

Greenish boundary has been silicified by hydrothermal silica, from Mangatete Quarry

The coarse deposit in the rock sample might be pyroclastic, which means hot sedimentary debris of volcanic origin derived directly from a volcanic eruption. Pyroclastic flows from Mt Vesuvius in Italy buried Pompeii and Herculeum during the Roman Empire.

Look for eye-shaped features along the side of the deposit – these are bubbles of photosynthetic (oxygen) gas that were silicified inside the mat, flatted by the stream action and continued growth (layers) of mats. Top of Mangatete Quarry.

The diatomite at Mangatete represents silicified lake sediments of the Huka Formation (Late Quaternary age, est. 50-60kyrs; kyrs=thousands of years in this area, cf. Brathwaite, 2003); it formed from diatoms in a quiet lake setting and the sediments were later zeolitised by circulating subterranean hydrothermal fluids after the lake sediments were deposited (Brathwaite, 2003). The diatomite is used for kitty litter and other products (Blue Pacific Minerals) because of the unique absorptive properties of its clinoptilolite zeolite – see: https://www.bpmnz.co.nz/en/minerals/zeolite/

The gravel washed into the ancient lake during a high energy event – volcanic eruption or storm, probably the former.

Lakes and marine basins within or close to volcanic centres are depocentres for pyroclastic deposits and serve as a record of eruptive activity (e.g. Manville 2001). In some cases, the [coarse, pumice-rich] pyroclastic deposits that punctuate the thin fine-grained background [lake] sedimentation are thick, massive to graded, pumice-rich, density current deposits fed directly from volcanic eruptions. The source of these eruptions can be from either relatively deep (≥150 m) subaqueous vents or hot pyroclastic flows traversing the shoreline from a subaerial vent (Cas & Wright 1991; White 2000; Allen & McPhie 2009; Allen et al. 2012). Identifying the vent setting for thick, pumice-rich density current deposits can be problematic as the material from both sources mixes turbulently with water and is transported in water-supported mass flows producing similar deposits. Additionally, deposits may also be poorly preserved due to reworking events, hydrothermal alteration and segmented uplift and exposure. Detailed lithological examination is a key method for determining transport and depositional processes as well as for inferring eruption conditions of pyroclastic deposits (e.g. Cas & Wright 1987; McPhie et al. 1993). Pumice rounding, lithic clast type and clast distribution are important attributes that enable the two different origins to be identified (Allen & McPhie 2009; Allen et al. 2012).